Absent Again: Women and the Covid-19 Response in Pakistan

Last month, Pakistan’s Prime Minister Imran Khan assured that the country’s economy was on the path to recovery as the pandemic’s intensity lessened. The state has adopted measures to curb the virus and mitigate its disastrous effects, including imposing lockdowns and introducing economic relief packages. However, Pakistan’s Covid-19 response is largely missing one half of its population: women. The pandemic’s disruptive impact disproportionately affects women and any recovery failing to incorporate an intersectional, gendered approach is incomplete. This blog provides a summary of the gendered economic impact of the pandemic, critically analyzes Pakistan’s major covid-19 response strategies with respect to women and finally explores possibilities for remedial strategies. It is also important to remember gender as a spectrum, with women being one marginalized gender focused in this blog.

In order to understand COVID-19’s compounded effects on Pakistani women, it is important to know the country’s existing multidimensional gender inequalities that make women and girls particularly vulnerable to the pandemic and its effects. The table below provides some context, illustrating Pakistan’s performance on two global gender equality indicators. India and Bangladesh, countries with similar socio-economic characteristics and a shared history with Pakistan, fare much better in comparison on the same indicators.

A policy brief issued by the UN Secretary General in April 2020 describes the impact of Covid-19 on women as far-reaching and long lasting as a result of existing gender inequalities. The Ebola Virus, another deadly disease with similar prevention measures such as quarantines, severely impacted women’s economic activity with the effects persisting for women even after men’s economic activity had returned to pre-crisis levels. Similar projections have emerged for Covid-19 which warn that labor market conditions for women are unlikely to be restored to original levels (which are already poor in Pakistan) even after preventive measures are lifted. The causes are manifold, including increased unpaid care work and household responsibilities of women, severely restricted female mobility and high levels of informal sector and vulnerable employment as opposed to men.

Figures 1 and 2 provide some statistics on these conditions. Time spent in unpaid domestic, care and volunteer work by Pakistani women is 10 times higher than men and more than women in both Bangladesh and India (figure 1). These numbers are likely to be greater with increased domestic responsibilities (health, elderly and child care) as a result of the pandemic. As the time spent on care work increases, women’s ability to participate in the workforce decreases. The World Economic Forum examined this correlation for a host of countries, finding that the greater the proportion of unpaid domestic work per day, the lower was female economic participation and opportunity. This suggests that the existing very low female labor force participation in Pakistan (20%) is likely to drop further unless targeted efforts are made to counter this. Care work also limits women’s ability to adjust to the changing circumstances, such as carrying out work remotely. Additionally, a greater employment of women in vulnerable jobs (figure 2) means weaker contracts and poorer work conditions. This means women are more susceptible to the layoffs and income declines consequent of COVID-19.

The pandemic’s gendered effects have consequences extending beyond the women themselves. For instance, higher female absenteeism and drop-outs in schools and decreased female labor force participation have been known to adversely impact healthcare (for women and children both), economic growth and incidence of child marriage amongst other consequences. In countries like Pakistan, where harmful gender attitudes and norms already threaten the safety and survival of women, these effects are expected to be far worse.

The Pakistani state has undertaken some measures to combat the virus and its effects. Its response includes complete lockdowns, partial or smart lockdowns in virus ‘hotspots’, mobilizing the National Command and Operation Centre to coordinate efforts against COVID-19 and disbursement of a one-off payment of PKR 12,000 under the Ehsaas Emergency Cash fund. Additionally, the State Bank reduced interest rates by 4.25 percent within a month of the lockdown (the rate presently stands at 7 percent) to incentivize employers to retain workers and pay their wages. Other concessions provided by the state bank include schemes such as concessionary refinance and extension of loans.

However, the state has demonstrated barely any sensitivity to gender in policy design, despite the aforementioned disproportionate effects of the virus and preventive measures on women. The National Action Plan for COVID-19 has no recognition of gendered or intersectional impact in either its goals or its objectives. Without recognition, it is unlikely actual action on the same will materialize. This is already evident from the lack of female representation on the various committees established to implement the plan. One research found women represent only 5.5% of these committee members nationwide, with a total of 253 men and only 14 women in COVID-19 response committees. Trans people, although now with rights on paper, are completely absent from these plans and bodies.

There are no economic concessions targeting women, such as financial schemes for female entrepreneurs or public procurement of items such as personal protective equipment from women-led businesses. In fact, there is little to no evidence available on the implementation and positive impact of existing concessions. The Pakistan Industrial and Traders Association Front (PIAF) has said that there is “zero implementation on directives of the government” and instead a refusal to offer loans and implement refinancing schemes with several small and medium enterprises suffering. Such a failure of implementation means even if a gendered and intersectional lens is employed in design, there is little hope for its benefits materializing.

Perhaps the only pro-women policy by the government is the Ehsaas program, established by the government’s Division of Poverty Alleviation and Social Safety as a new poverty alleviation mechanism in 2019. A reformation of the Benazir Income Support program, Ehsaas Kafaalat provided women from very poor families a monthly stipend of PKR 2000 for 4 months beginning February 2020. Although more updated and accessible than its predecessor, the Kafaalat program still requires significant changes to benefit the female population. This is because the program requires a notable degree of access to digital and financial resources such as cellphones, bank accounts as well as IDs, most of which are disproportionately unavailable to women in Pakistan. Additionally, the program relies on the 2011 National Socioeconomic Registry (NSER) that is yet to be updated. This means no COVID-specific targeting has been done under the Kafaalat program. Since the targeted households are the poorest of the population they are likely to be largely in rural areas while the virus hotspots are mostly identified in big cities. So, although the program’s funds will benefit recipient women, these benefits are less likely to reach women significantly impacted by the virus. The categories of the umbrella Ehsaas program addressing the new poor (II and III) do not target women specifically.

For Pakistan to truly recover from the pandemic, a holistic and intersectional approach needs to be adopted towards remedial strategies. Existing research and literature provides several examples that can serve as replicable models for the country. Economic Crises and Women’s Work, a report by UN Women, provides the examples of Argentina and Sweden, two countries whose crisis response was sensitive to women’s employment conditions. In Sweden, this involved strategies such as direct public employment for women as well as educational and vocational assistance. Such strategies can be incorporated into existing programs like the government’s employment generation scheme “green stimulus” and provincial vocational training centers. More importantly, Sweden’s policies were not limited to isolated labor market interventions but involved a broader macroeconomic strategy that cultivated better quality jobs and decent living conditions. On the other hand, Argentina’s example emphasizes another important aspect of recovery; administrative and legislative changes, such as enforcement of minimum wages and mechanisms to ensure compliance. Moreover, a strong welfare state and collective bargaining mechanisms, especially for vulnerable groups at the bottom of the wage pyramid, is crucial for managing any crisis and its aftermath.

Equally crucial for policy design, both during and after the pandemic, is the collection and dissemination of gender disaggregated data on Covid-19.  A contextual analysis of such data allows for more nuanced decision making. Furthermore, an analysis of Ehsaas Kafalaat identifies solutions such as delivering funds directly to women as a first step in addition to other mechanisms including giving priority to applications submitted by women. These approaches allow program benefits to reach more women and pave way for further action. Finally, health and safety are crucial for survival and policies must address the atrocious neglect women face in accessing quality services. Pakistan can also explore innovative solutions during the pandemic such as in the Netherlands, where midwife teams are utilizing closed hotels to provide maternity care. Of course, all such solutions require care and precautions on part of the practitioners.

These examples point to the various possibilities for gendered approaches to the pandemic’s management. Pakistan’s female population makes up almost half of its total. Neglect of women in any policy will have dire consequences for the country as a whole. As Pakistan’s Covid-19 battle seems to ease and attention turns to recovery, it is imperative that women – especially those belonging to vulnerable groups - are centered in policy design and implementation.

The land is eager to teach 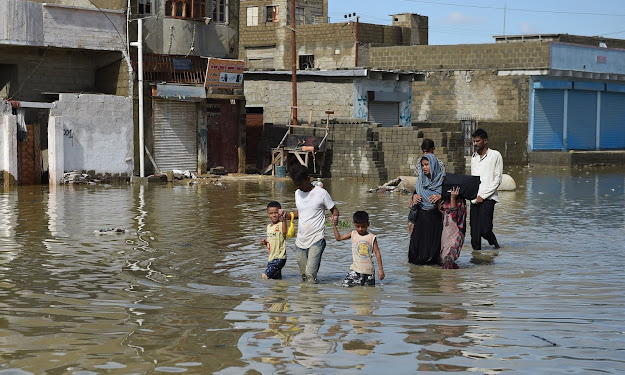 image by Asif Hassan/AFP
“If consciously or otherwise you were brought up believing that Karachi in 1947 was "a land without people for a people without land" this must be a disturbing time for you.  Commiserations.
And if in your imagination Karachi was not part of Sindh, commiserations again. Check Google Maps. What is Karachi? A settlement on the sea shore, occupying land between the Hub and Malir Rivers, to the north of the farthest reach of the Indus delta.

You assumed, without ever caring to actually know, that you were entitled to the water that flows down the Kirthar Range, and the Indus, but only if it comes in taps. Commiserations. Water flows down. Sometimes taps come in the way. Sometimes not.

Urban planners duped you into assuming that the land, its rocks, hills, riverbeds, bushes, backwaters, mangroves, the sea, its tides and currents don't matter. Omnipotence of civil engineering. Commiserations.

You need to lash out. Of course you do. From omnipotence to impotence. What else will you do? The word Sindh, forget Sindhis for a minute, the word Sindh, it strikes fear because it shatters the fiction of omnipotence. Commiserations, and compassion.

Take time out. Let things settle. A crime has been committed. Relax, you are not the criminal. But you are not the most wretched victim, certainly not the only one. Let it sink in: there is no land without people, there are no people without land.

You are not impotent, omnipotence was an illusion. The fear is understandable. Let it pass. Sindh will irk you less. Sindhis too. The land is eager to teach, through people who have given it the time, their stories stores of knowledge, wisdom even, will make you powerful again.”
This post is adapted from a Twitter thread by the author published on 2 September, 2020. Follow @CollectiveKHI and @HarisGazdar to stay up to date with analysis and insights on current news in Pakistan and South Asia.
Posted by Laila Rajani