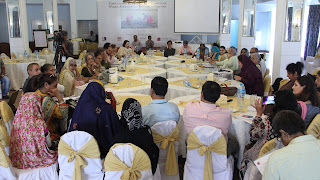 Both presentations elicited interesting questions from the participants around land rights, social protection, and health policies highlighting the urgent need to compensate women agricultural workers as most of their work is often unpaid or underpaid.

A consultative discussion with the participants, moderated by Ms. Khawar Mumtaz (Chairperson, National Commission on the Status of Women) took place in the second half of the day. The discussion was around the need to place women agricultural workers at the center of policies and programmes so that their health, wellbeing, and agency within the household can be improved. Participants raised the need for effective implementation of programmes and policies that could directly reach women agricultural workers. They asserted that provision of basic healthcare services such as setting up dispensaries near the villages was needed as many women have limited mobility outside of their villages.

Improving women’s right to access and own productive assets such as agricultural land was also a key concern for participants who have been working with landless women. Provision of social security and microfinance loans to agricultural workers without discriminating on the basis of gender was also brought forward as an important policy priority that needs attention from the state. Participants concluded that much needs to be done at both policy design and implementation levels in order to improve the welfare of women agricultural workers.

After hearing the discussion, I came to the conclusion that provincial governments should establish systems of support for women agricultural workers. Many individuals often challenge previous governments on the basis of ineffective implementation at the grassroots, but one should also look at programmes that have worked and yielded positive results particularly for women.

Dr. Nafisa Shah, Member of National Assembly said that the Benazir Income Support Programme (BISP) has been a model of success in providing marginalized women with official recognition and direct access to state's resources. It was the first step in allowing women to hold any department and personnel of the state accountable or register a complaint without any male person’s support. There are lessons to be learnt here.