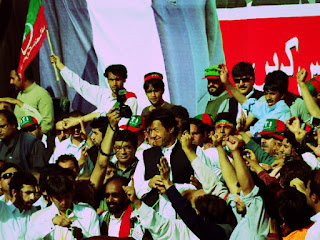 On social media, women activists expressed disdain for the suggestion that being feminist implied they respected the role of motherhood less, most being devoted mothers themselves.

He escaped virtually unscathed from a set of allegations within his party that its leadership had a habit of making unwelcome advances to some of its women members. Ayesha Gulalai put her career at stake by going public with the details. The National Assembly tried to constitute a cross-party committee to investigate, but PTI and its coalition partner Jamaat-i-Islami refused to participate, alleging it was politically biased. Other women members spoke out in support of Gulalai, but the matter was never properly investigated within Parliament.

Imran Khan’s fondness for the Taliban, blasphemy punishments, public appearances with religious extremists, and defense of the traditional all-male jirga are well-known to the Pakistani public. While these tendencies make him anathema to women’s rights activists, who have fought for the last forty years against discriminatory laws and practices in the name of culture and religion, they don’t seem to bother the female PTI voter.

It would be useful, therefore, to take a look at the experience of women closer to the seat of power, during the PTI’s last government in Khyber Pakhtoonkhwa 2013-18. Legislation is the primary function of an elected assembly, more so after the passage of the 18th Amendment which devolves most law-making to the provinces. Unfortunately, no progressive legislation for women passed in KP under the PTI government.

In contrast, PPP-led Sindh and PML(N)-led Punjab each passed important domestic violence laws that had the political backing of their respective provincial governments. While they are imperfect pieces of legislation, they nonetheless recognize the different types of psychological, physical and economic violence against women that are commonplace in Pakistan, and attempt to provide women with access to justice and protection. When the Punjab law was put to the vote in 2016, male PTI members walked out of the Assembly and refused to participate in the vote, even though women from the party remained as a show of protest.

In KP, the PTI government undermined women’s efforts to pass domestic violence legislation, according to numerous interviews with those who were part of the failed process. The first draft in 2015 was based on the relatively weaker Punjab law, so the KP Provincial Commission on the Status of Women was sure it would pass as it was drafted with the support of even the religious parties. However, the law department suggested to the Chief Minister that since this was a ‘sensitive’ bill, it should be sent to the Council of Islamic Ideology (CII) for approval.

At this stage, the Chief Minister had the option of backing the legislation by opening it up for discussion within his cabinet and Assembly, while demonstrating his support for the cross-party effort. By allowing CII the opportunity to call the bill un-Islamic, it virtually killed it (Punjab never sent its draft to CII). The KP Women’s Caucus in the Assembly later re-drafted the bill, and included even more concessions to male power by suggesting ‘corrective measures’ by husbands would be permissible. However, the outcry from civil society activists succeeded in blocking this bill from presentation, and since then the Caucus and KP-CSW have not managed to re-establish a strong working relationship.

Meraj Hamayun, who chaired the Caucus, believes PTI’s Speaker of the KP Assembly was ‘prejudiced and anti-women’. Throughout the Assembly’s tenure, the 22 women members, almost all on reserved seats, struggled to be taken seriously. They were subjected to snide remarks from male colleagues, ‘who told us we should be happy we found ourselves in the assembly, we might as well get dressed up nicely and just turn up, nothing else.’

After some women legislators initially spoke up on an issue, but against the PTI party position, sources allege the Chief Minister threatened them to never dare divert from the party line again. As a result, they did not speak for the rest of their days in the house.

A PTI woman told me she believes a certain mindset exists, even within the party, “that politics is not for a good woman.” Despite having a majority in the house as well as a PTI Chief Minister, there was no will to pass a law for women. ‘I don’t know how to shake our party leadership,’ she says.

Although PTI has strong support amongst women voters, its government in KP virtually abandoned their own (female) elected representatives when called upon to protect women’s interests. ‘It’s the other half of your country that you are marginalizing,’ says a baffled member of the KP CSW. The alleged sidelining of the women’s wing in the selection of reserved seats candidates for the 2018 elections suggests the party is not interested in grooming women to win elections.

Women would do well to consider the consequences of having a government that is deaf to their interests.