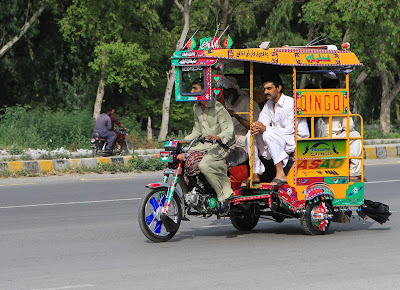 Since buses, which are old and unreliable (the newest model of the bus is from 1980)[1], have not been able to fulfill the demand, in 2008 an informal mode of transport, the chingchi, came up in the city. A chingchi is a motorcycle-rickshaw; it has the front of a motorcycle and the back of a rickshaw. Depending on the variant it can seat 4-12 people. The first chingchi was a low-cost Chinese innovation, called a Qingqi, the adapted name is now used to refer to similar vehicles being manufactured locally.

Chingchi owners soon organized and started operating on defined routes. The vehicle’s popularity rose largely because it was cheaper, connected passengers to areas where buses did not go, and was safer from muggings. The latter in particular is important in Karachi because muggings in other vehicles, including buses, are much more common. Consequently, the number of chingchis grew steeply over the last five years, to approximately 65,000 in March 2015.[2]

However, chingchis are illegal as they are not registered vehicles, and as a result chingchi owners, represented by the All Karachi Chingchi Rickshaw Welfare Association (AKCRWA), have been embroiled in court cases since 2010. Earlier this month chingchis were finally banned in Karachi (and the rest of Sindh) by the Sindh High Court.

What has the impact of the ban been?

As part of fieldwork conducted at the Collective in February and March this year, I interviewed several stakeholders in Karachi’s transport sector, including the president of AKCRWA, Safdar Shah. Approximately 65,000 chingchis operated in Karachi, on 400 routes. Simple back-of-the-envelope calculations tell us that there were roughly 97,000 people (and consequently, their families) whose source of income relied directly on this vehicle. All of these people have become unemployed with the stroke of a pen.

In addition, according to a report, 66 percent of public transport users travel for less than 10 km. This large chunk of users was primarily being served by chingchis, who will now have to seek a substitute mode of transport.

Thus, there are a significant number of people in Karachi who have been affected adversely by the ban of chingchis, as no adequate alternative mode of transport is currently being provided.

What should have happened?

Chingchis arose in the first place because there was a gap between the demand and supply of public transport, which the buses and minibuses were not able to meet. This gap has been created again, and is likely to be wider than before because the number of routes on which the buses operate have decreased by 33 percent since 2008. It is clear that Karachi desperately needs a system of mass transit. Although the Sindh government has announced that work on a Metro bus will begin by the end of this month, at a minimum, this will take a year to be up and running.

The Sindh government could have followed the Punjab government’s example. In Lahore, instead of banning them outright, a plan was developed to phase the chingchis out after the metro bus was operational. This plan also permitted chingchis in those areas where public transport was otherwise not available, such as in the Walled City. Moreover, alternative employment was to be provided to the chingchi owners and drivers.

There is a reason for the popularity of chingchis. Without any other alternate form of mass transit being introduced in the short term, it is likely that another informal form of transport will come up in its place. Indeed, a friend who lives in Orangi Town tells me that rickshaws have already started operating on the exact same routes as chingchis. However, these are significantly more expensive for the consumer, and unlikely to be feasible in the long term. Nevertheless, it is only a matter of time before this spreads to the rest of the city as well, highlighting the serious failure in planning and governance on the part of the government.